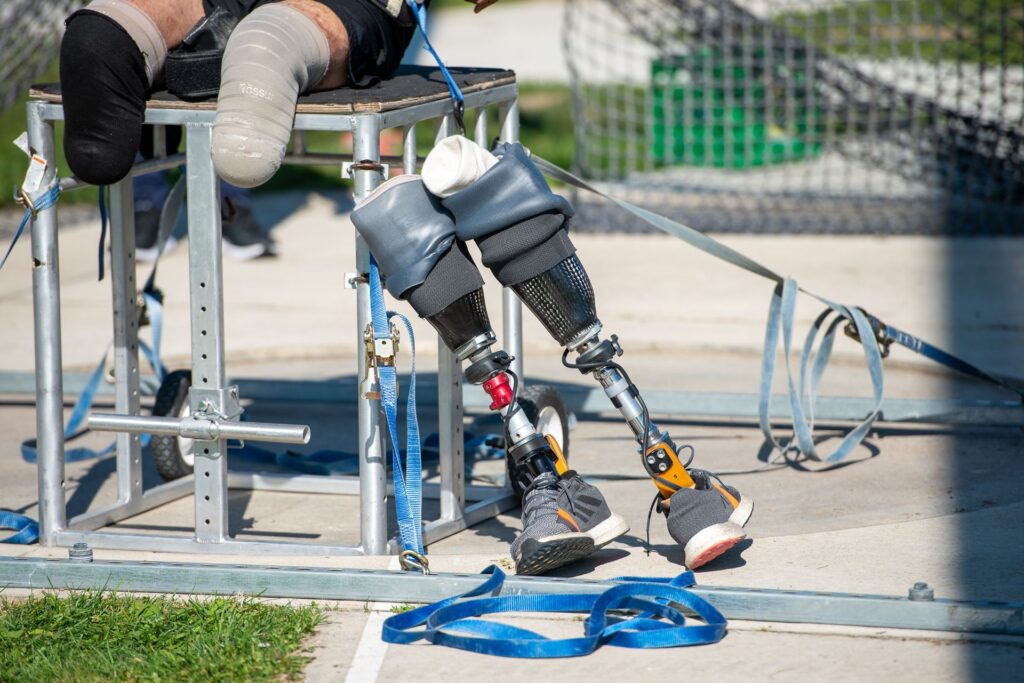 Artistotle Domingo calls himself a multi-sport athlete, but that wasn’t always the case. As a kid growing up in Toronto, he was active and a naturally fast runner, but he never embraced one sport. His journey into athletics began in adulthood, with amputation of his left leg in 2017, followed by his right in 2019.

For more than 15 years, Aristotle lived with immense pain in his feet from a previous illness. When surgeries and other treatments did nothing to relieve the pain or improve his quality of life, he made the decision in 2016 to amputate, and says it gave him a new start.

“My physiotherapist on day one after my first amputation said, ‘I don’t understand why you’re so happy and why you’re always smiling’. The difference between my amputation and a lot of people is that I had grieved my loss for 15 years. My amputation was a release for me in that I’d had more pain before the amputation,” he says. “I was given the option to have another surgery and hope for the best and I just kind of said, I’m done, I can’t I can’t do this anymore. But when I finally had my leg removed, it’s like a sigh of relief. The only pain I’d have now is recovering from the surgery. The output is different, so on day one of rehab, my goal was to be better than I was the day before my surgery. That’s why I sometimes say I was more disabled before my amputation than I am now. What a privilege I was given, reconcile the feelings that I had prior to amputation.”

While still in rehab, his determination to make each day better than the last sparked an idea: to rediscover his enjoyment of running with a 5K race, just months after surgery.

“I had not picked up running in 15 years—I kind of put that light behind me and then I decided I just wanted to do something for myself,” he says. “I thought, let me just do this one race this one time. I just wanted to finish that 5K regardless of how slow or good I was at it, regardless how long it would take me. It was a jog-walk-run, jog-walk-run, kind of scenario, but that whole rush of accomplishment and that athletic bug that I guess still lives inside me … all those years later, it just kind of all came rushing back and it was ‘oh I want to do it again’.”

“Just one 5K” turned into one 5K a month, which lead to Aristotle trying a number of other sports, including wheelchair racing, sitting volleyball and eventually seated throws. “The Cruisers had a trial on throwing, and I went out and I really had a great time, from just the activity itself and just for the people,” he recalls. “I was just starting with the beanbag version of the shotput, but again it’s that athletic bug that bites you. Like, let’s see where I can go with this.”

Though COVID has limited the opportunities for training with the Cruisers, Aristotle has been participating in regular weekly workouts alongside his Cruisers teammates with the Sheridan College strength training program.

“I think having that activity is not only good for my physical health, but the whole social aspect of being in sports, and being in that environment where you get to participate in healthy competition but at the end of the day you’re also a community and you’re also friends. It’s those every Sunday meetings that we go and throw or it’s those times that we get together to either just talk about what we’re doing or how we want to move forward with our team. There’s also things that you don’t often get with your regular social group because you all share not only the sports factor, but the life experience of having a disability that no one else will understand in your regular social group. It’s that community that you feel a different belonging than you do with your regular social group.”

When Aristotle realized there was a lack of support for the amputee community in Toronto, he founded the Amputee Coalition of Toronto (ACT) to advocate for better health care for people with disabilities and serve as a support network. As we mark Limb Loss and Limb Difference Awareness Month in April, Aristotle says it’s an opportunity to highlight the important difference having the right supports can make.

“I truly believe that if you set up a person to succeed, you will get more out of that person,” he says, “What I mean by that is if you set up a person for success—meaning they can participate in the community, they can see their friends, they can do their own groceries, they can develop their independence, they can go back to work even and contribute to taxes. That means you have a person who is set up with the correct prosthesis or the correct equipment to participate in life.”